Trees are the icons of forests, but forests are home to many more organisms than we can see with the naked eye. Our research has found that what fuels tree growth has much more to do with the invisible organisms in forests than once thought.

Since trees first appeared hundreds of millions of years ago, they have co-evolved in close symbiosis with fungi. Fungi were once thought to be plants, but they don’t produce chlorophyll, they absorb energy and nutrients using digestive enzymes, and their DNA is closer to animals than plants. It adds up to make them an entirely unique kingdom.

Most fungal tissues are made up of thin, agile, hair-like structures called mycelium. Mycelium can actively explore the tiny crevices of soil minerals where nutrients are held. Some of these nutrients are critical to tree growth, but roots can’t do what fungi can. Their mycelium releases acids and enzymes to extract the nutrients from soil minerals or dead plant, animal, and microbial material. Because of their co-evolution, fungi often share their bounty with trees.

How do fungi affect forest growth?

In a 2022 paper, we explored how important this fungal resource sharing might be for tree growth. Specifically, mycorrhizal fungi are species which have evolved to live in specialized symbioses with plants. There are different kinds of mycorrhizal fungi, but here we only considered the ectomycorrhizal type because most trees are associated with them, especially in the northern hemisphere.

These fungi colonize the exterior of fine roots like a tight-fitting blanket (Image 1). While they provide trees with otherwise inaccessible nutrients, they also receive between 10 to 50% of the energy trees produce via photosynthesis. Because trees rely on ectomycorrhizal fungi for nutrients and most ectomycorrhizal fungi need trees for energy, this relationship is often considered ‘mutualistic’ – both species benefit. However, our study shows that this overly simplistic view of mycorrhizal symbiosis needs some updating. 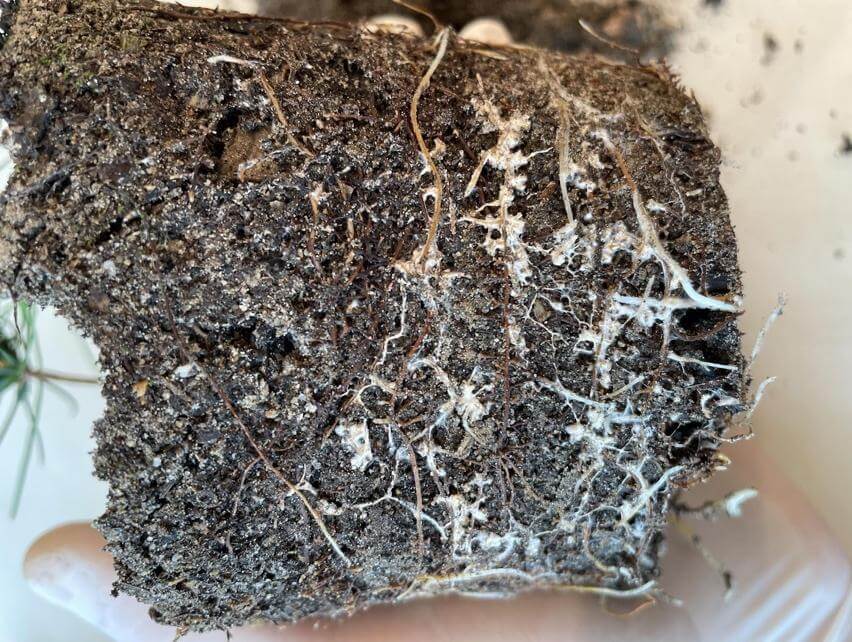 We paired datasets from the ICP Forests Network in Europe with molecular surveys of the ectomycorrhizal fungi at each forest plot to identify the particular role each type of fungus has in the forest. This allowed us to see how the diversity of ectomycorrhizal fungi is linked to tree growth rates.

Working across 137 plots across 15 European countries, we found that the type of ectomycorrhizal fungi community present was one of the top predictors of tree growth rate. We also accounted for other well-known drivers of tree growth like mean annual temperature, nitrogen deposition, and stand age in order to isolate the signatures of fungi independent from other factors (Image 2). So why might some fungi more than others provide trees with such big boosts, even tripling the rate of tree growth?

Nitrogen is an important nutrient for tree growth, but trees can’t access it without help from fungi. We found that fungi in fast-growing forests are better adapted to acquiring nitrogen in bioavailable inorganic forms, meaning it’s easily accessible to the fungi, giving trees a growth boost. On the other hand, fungal communities in slow-growing forests are more specialized at acquiring nitrogen in its organic forms. Before organic nitrogen can be shared with trees, it has to be decomposed into smaller, bioavailable varieties by fungi. For this reason, acquiring organic nitrogen requires more energy than inorganic nitrogen. Since ectomycorrhizal fungi obtain their energy from trees, we think this might be a key reason why some ectomycorrhizal fungi promote tree growth much more than others. 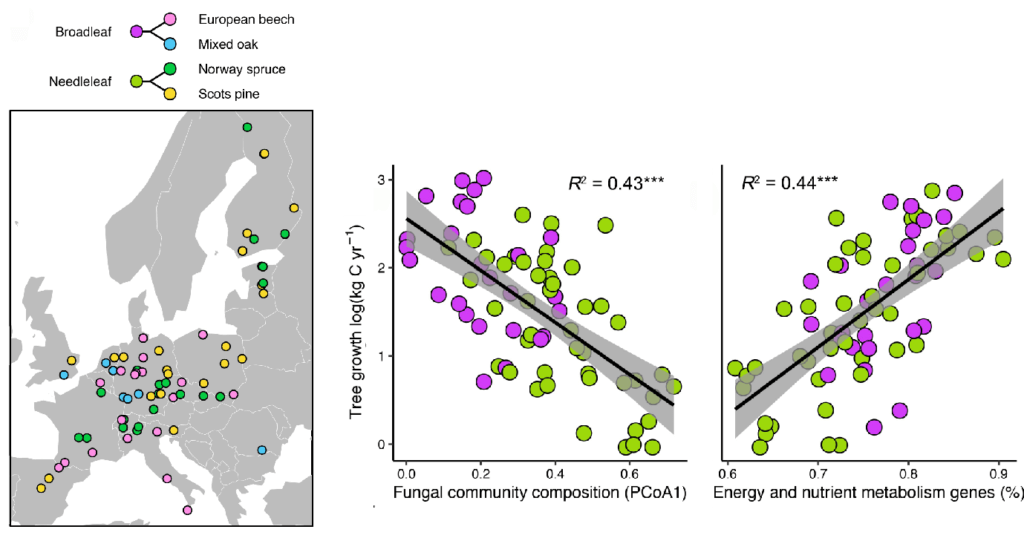 Image 2: A map of the study sites across Europe where we measured the relationship between tree growth and ectomycorrhizal fungal communities. The panels on the right show the correlation between tree growth and the composition of ectomycorrhizal fungi and the proportion of fungal genes encoding for the release of chemical energy and inorganic nitrogen.

In addition to their range of nitrogen acquiring strategies, ectomycorrhizal fungal ‘bodies’ are highly varied. Think about how different human bodies can look and how this affects what we look like and do. Fungi are an even more diverse group. Some ectomycorrhizal fungi produce tiny amounts of biomass no longer than a few centimeters. Others have hugely long bodies made up of thousands of kilometers of mycelium. An intermediate group is the ‘medium-distance fringe’ type. ‘Medium-distance’ because they fall somewhere in-between the short- and long-distance body types and ‘fringe’ because they produce mycelium that fans out in three-dimensional space. Ultimately, this group produces tons of biomass. We found that forests with high amounts of ‘medium-distance fringe’ type ectomycorrhizal fungi grow slowly. One explanation for this is that the production of this extensive mycelium requires a lot of tree-powered energy compared to other ectomycorrhizal fungal body types.

Our findings do not imply that these fungi slow tree growth, because without them, trees would likely fail to acquire necessary nutrients to grow at all. Rather, these results explain why some species promote tree growth to much larger extents than other species: Because ectomycorrhizal fungi get their energy from trees, our results give rise to the hypothesis that fungi that need lots of energy from trees leave less energy for the tree to grow quickly, while fungi that need less energy from trees allow trees to put more energy into their own growth.

Our findings are the first to demonstrate how variation in ectomycorrhizal fungi affects ecosystem function on large scales – in forests across a continent. This is especially important because we can more accurately model forest carbon capture when we include ectomycorrhizal fungal parameters in these models. These types of models need to be accurate to better prepare for the future and inform forestry initiatives in the face of climate change. Our results also highlight the importance of conserving habitat for fungal species that promote specific tree growth rates, and provide a blueprint for how to inoculate certain fungal communities into forests or nurseries in order to manipulate ecosystem functions like nitrogen cycling and tree growth.

So next time you’re looking up at the tall trees in a forest, remember the unsung heroes belowground. Without them, our forests would not grow.

Learn more: Why forests are so important for biodiversity, climate change, and human well-being.