Picture a forest. For starters, you might think of trees. Now think of what else lives in and among those trees, from underground microbes to insects to birds and mammals. Research shows that animals aren’t just living in the forest – they are in fact the architects of tropical forest ecosystems.

Dr. Carolina Bello studies the relationship between animals and forests and explains how tropical forest growth depends on animals.

How do animals help forests grow?

In tropical forests, animals disperse more than 70% of tropical trees, which means they are essential for tree regeneration. Trees generate a large number of seeds that can fall to the ground and can produce seedlings. But when an animal ingests a seed and carries it to a place distant from where it ate it – away from the parent tree – the seed is more likely to spawn a tree. The seeds that are dispersed far away manage to escape competition and pathogens such as fungi and insects that concentrate around the parent tree. In addition, many seeds need to pass through the digestive tract of animals in order to trigger their germination. Therefore, we can think of animals as the ones who plant trees when they walk or fly through the forest.

What effect does deforestation have on animal populations and forest regeneration?

The major impact of deforestation on forest animal communities is habitat loss and fragmentation. But even after habitat fragmentation, surviving animal populations face restrictions of movement, which limits their access to food resources such as fruits. By limiting access to resources and by limiting mobility across the landscape, the dispersal and regeneration of trees is also diminished, especially in open areas to be restored.

Defaunation is the extinction or functional loss of animals. Habitat degradation, hunting, road collisions, introduction of invasive species, pollution, disease, and poaching can produce defaunated forests, also called empty forests. For example, 38 million animals per year are victims of hunting and illegal capture in Brazil. And hunting pressure has diminished the abundance of medium and large vertebrates in intensely hunted areas by 37% to 90% compared to low-hunted areas. These processes disproportionately affect large animals like primates, hooved mammals, large birds (such as guans and tinamous), rodents, and armadillos.

Why does your research single out guan birds, tapirs, and spider monkeys?

These species are all especially large frugivorous (fruit-eating) animals. Guans are one of the largest frugivorous birds in the forest; they are wild relatives of chickens and turkeys, so they are often heavily hunted. Just like spider monkeys, guans’ diet is mostly fruits. Thus, these animals are among the few that can disperse large seeded trees and can disperse seeds over long distances. Large seeded trees are important as they tend to be the forest giants – large trees, with dense wood that store a lot of carbon. As large animals, guans, tapirs, and spider monkeys are threatened because they require large areas of habitat and are more desired for hunting and wildlife trafficking. So when forests are degraded, large animals are the first to disappear. Due to their unique role in dispersing large seeds and the threat levels these animals face – coupled with how important large trees are to the carbon stock – we focused on evaluating these animals’ effects on tree recruitment. 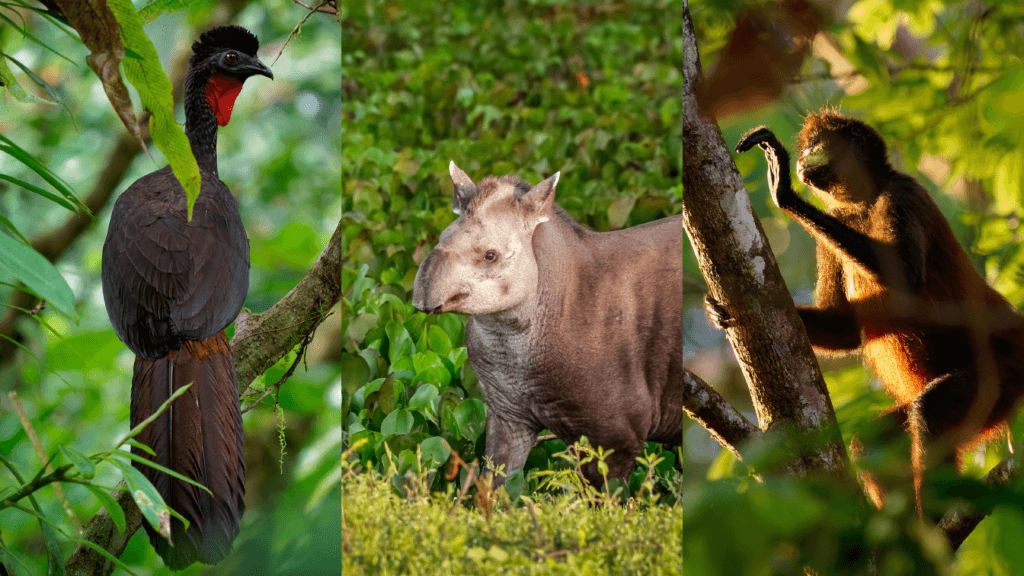 Guans, the South American tapir and spider monkeys are some of the frugivores at the heart of Dr. Carolina Bello’s research. They are known for their ability to disperse large seeds over long distances. (Credit: phototrip.cz / Adobe Stock, Uwe Bergwitz / Adobe Stock, Petr Šimon / Adobe Stock)

Why do forests require animal biodiversity?

Trees produce fruits with a great variety of colors, shapes, sizes, and flavors. Each of these characteristics attract different types of frugivores. For example, bats are often attracted to small, exposed fruits that they can easily grasp and carry in flight, while primates prefer fleshy, reddish-colored fruits. The size of the fruit and the seed is a limiting factor for the fruit to be consumed, because the fruits, and especially large seeds, can only be ingested by animals that have large mouths. This means a great diversity of fruits requires a great diversity of fruit-eating animals to be dispersed.

What happens to forests when animals die out?

When we lose forest animals, we not only lose beautiful, charismatic animals, we lose the vital interactions and processes that these animals carry out in the forests. For example, herbivores and seed predators control species populations, while frugivores disperse seeds to promote the growth of new trees. These interactions impact the populations of tree species by changing the composition of the forest. But it’s not just direct interactions that are affected. The behavior of  animals can also affect the amount of mycorrhizae (underground fungi) and essential nutrients such as carbon, phosphorus, potassium, and calcium in the soil, which are essential for tree growth. In this way, when the dispersal, recruitment, and growth of trees is impacted by the loss of animals, ecosystem services such as carbon sequestration are compromised.

How do animals affect how much carbon tropical forests can absorb and store?

How can animals benefit restoration projects?