Scientists know that climate change is happening, partly through technical measurements, like how much carbon dioxide is in the atmosphere. But for several decades now, the effects of that heat-trapping CO2 have been visible to anyone, not just scientists. As the global temperature has increased, spring has accelerated, with the most dramatic shift starting in the 1980s.

Tracking the effects of climate change

An article in the journal Nature Climate Change analysed the world’s longest time series of spring flowering and leaf-out. Some of these citizen observations date back hundreds of years, as is the case in Japan, where people have been recording the annual blooming of Kyoto’s famous cherry trees since the year 812 AD. In Europe, the longest series is thanks to the Marsham family, who followed leaf-out dates of several tree species in the United Kingdom from 1736 to 1958. In the same region, a resident named Jean Combes has kept notes on the budding of oak trees since 1950, extending the Marsham data to the present day. In addition, the study reconstructed flowering dates of three Chinese plant species back to 1834, and it drew on two sets of records from Switzerland: the flowering of a horse chestnut since 1808 and observations of a cherry tree’s blossoms starting in 1894. 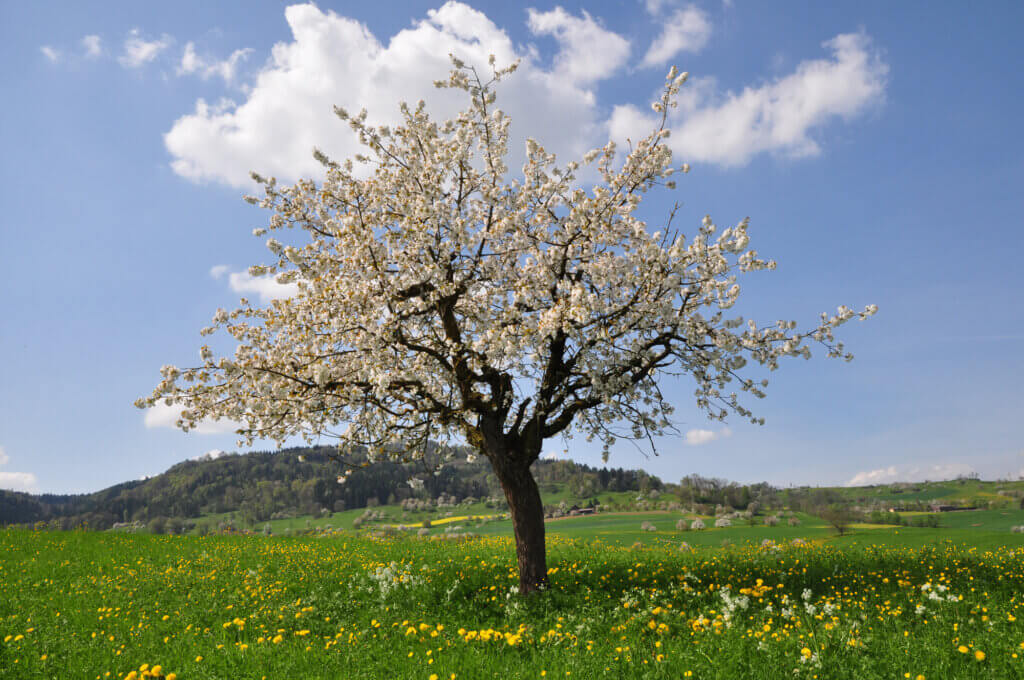 The flowering dates of this cherry tree in Switzerland have been recorded since 1894. (Credit: Regula Gehrig, MeteoSwiss)

For more than a century, industrialised nations have been burning increasing amounts of fossil fuels, releasing excess carbon dioxide into the atmosphere, where it traps heat and causes climate change. Even as industrialisation was underway, all of the time series showed that flowering and leaf-out dates held fairly steady during the 19th century. But in the early 20th century, nature’s calendar began shifting earlier as the global temperature increased. Then, starting in the mid-1980s, as the temperature shot up, spring took a major leap forward in all five time series: between 1985 and 2020, trees flowered from six to 30 days earlier than they did before 1950, and in 2021, the cherry trees in Kyoto bloomed the earliest ever in 1200 years since record-keeping began. “This is clear evidence of the direct consequences of human-caused climate change on plants and their ecosystems,” said Dr. Constantin Zohner, one of the study’s co-authors.

Earlier spring is a call to action

These dramatic shifts follow the rapid increase in the global temperature; on average, the world is now 1.1 degrees Celsius warmer than it was during pre-industrial times. As these records of spring phenology show, global warming is shifting nature’s calendar, which is cause for concern. Changes in when trees flower and leaf out can damage the complex web nature relies on. For instance, if a tree blooms before an insect that pollinates it hatches, the tree loses the ability to reproduce, leading to other disruptions to its ecosystem. And because these time series are not from the areas where global warming is most pronounced, the article’s authors suggest it’s possible even more significant changes to spring are happening in other parts of the world.

The silver lining is that the acceleration of spring is something anyone – not only scientists – can observe first-hand. As the effects of climate change become more visible, they increase the chance that our societies will act to stop it by cutting fossil fuel emissions and protecting and restoring ecosystems, which will have far-reaching benefits for nature and humans alike.